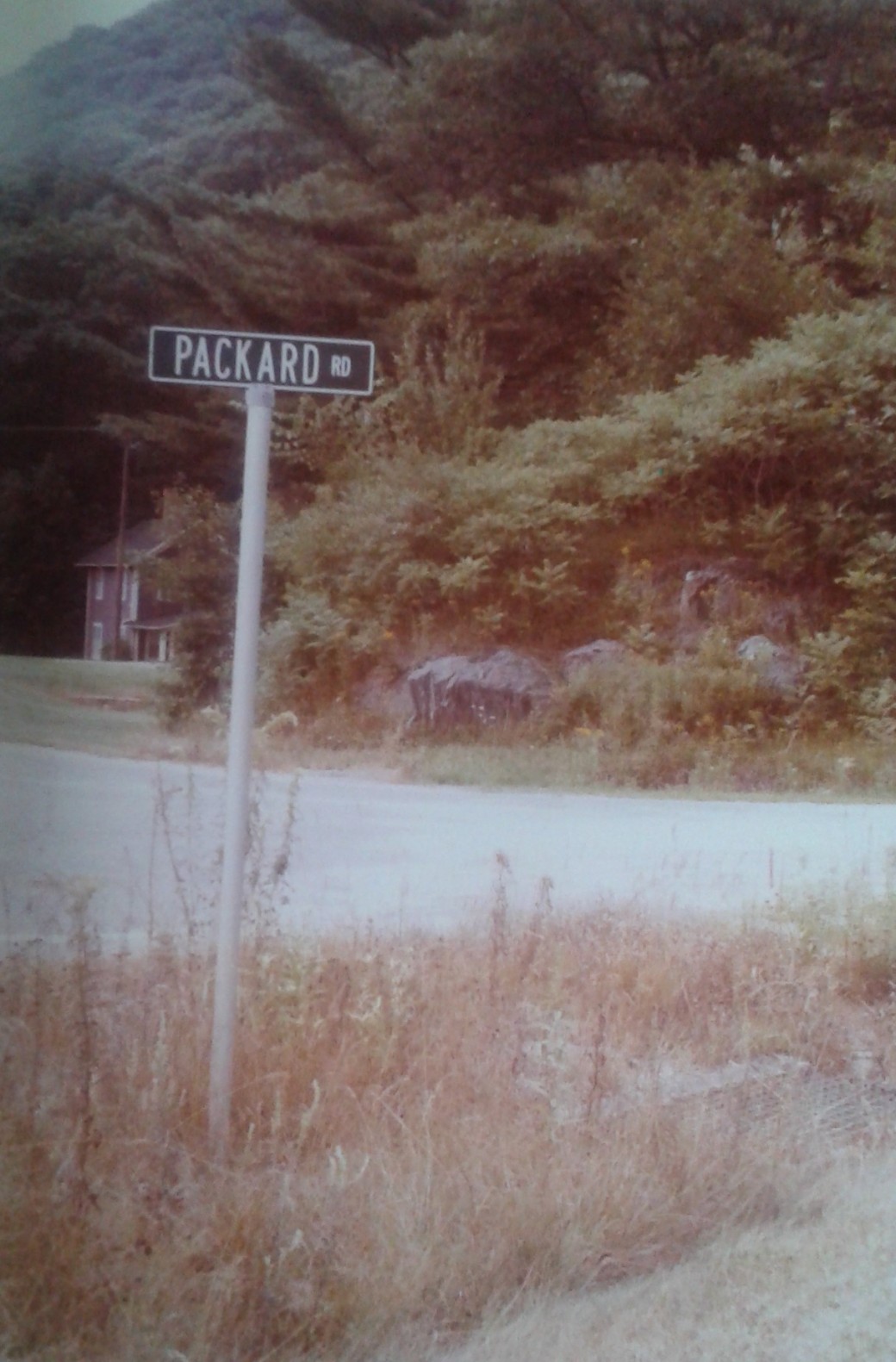 Packard Road in Plainfield, MA. Photo taken by Bob Mills. As he described it in July or August 1980, Packard Road connects “Cummington to Plainfield over steep hills. It is mostly a gravel road with lots of ferns, rocks, and trees, but nothing else but a few random farmhouses. Only Plainfield has a few restored old homes – the area is rather poverty-stricken.”

In my searching, I discovered a number of places across the U.S., which have Packard in the name, apart from the image above and Packard Cemetery.

Let’s start with Packard Rocks, Rhode Island. We know, as stated in Rhode Island History (Jan. 1942 edition, p 22) that the 500-acre farm that Captain Samuel Packard, the person who tried to illegally capture African to serve as his slaves, bought in 1800s, “extended from Packard’s Rocks in the Narragansett Bay to the Fish Pond at the Head of Narrow River.” This isn’t much of a surprise since this Samuel Packard was buried in Rhode Island like his wife Abigail. Other books confirm the location of Packard’s Rocks, sometimes called Packard Rocks, although none told the history of the place.  [1] Even the GNIS entry lists nothing on the origin of the name! But, based on what was stated earlier, it was likely given its name because it was once part of a farm owned by Samuel Packard. While I couldn’t find land records using an official government site, and an unofficial one, for Rhode Island, I did find its location, and a map showing a Packard Road in the region in 1900, highlighting the road with a yellow square:

This is document 99999924, a plat recorded on January 1, 1900 if the North Kingston Town Clerk website is accurate on this date.

I looked through the land evidences too (since the probate and town records cannot be accessed unless you are at a Family History Library), but since the indexes are spotty, I couldn’t find anything without going through the whole book.

With that, we move onto the next one: a historical Packard post office. It fulfilled this role in 1892, 1901, and 1902, according to the GNIS. Further information is not known at this time. The final place I’ll focus on is Packard, Michigan. It is presently a populated community place, and has some scattered mentions in books. But nothing notes its origin, unfortunately. But, we can say it had that name by at least 1901 as a railroad station was there. There is a lot of false drops in the search results, so it is hard to search for completely accurately.

That’s all for this week. Until next week!

5 thoughts on “Places with ‘Packard’ in the name across the U.S.”