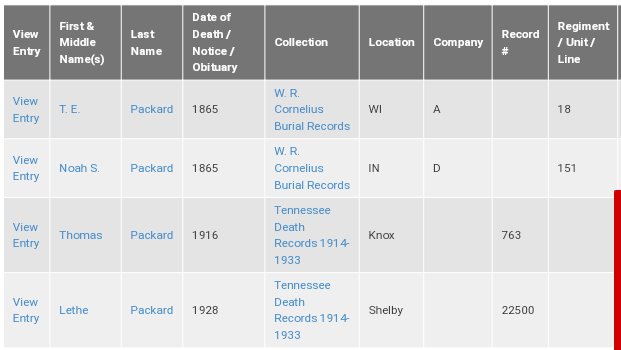 On July 3rd, I noted on Twitter that I had found a number of Packards “on the indexes of the Tennessee State Library and Archives website.”

The Tennessee State Library & Archives lists four entries for the Packards.  The first of these is Noah S. Packard, with the record of his death found within the W. R. Cornelius Burial Records, noting his death in 1865 in Indiana, part of Company D, Regiment/Unit/Line 151. So, I dug a little further to learn more about this Noah Packard and T.E. Packard, who died the same year but in Wisconsin, and was in Company A and Regiment/Unit/Line 18.

Finding information about Noah was tough, because the only entry for a Noah, who died in 1865, was someone buried in Tennessee. For T.E. Packard, nothing turned up on Find A Grave either. I couldn’t find any obits for either of them, unfortunately. There was just a bunch of false drops. Searches on Family Search were also fruitless, for both of these Packards.

The next person, chronologically, was Thomas Packard. He died in 1916, as noted in the Tennessee Death Records 1914-1933 (specifically vol. 30, record #363), in Knox County, Tennessee. No results could be found on Find A Grave, sadly. He also seemed strangely mysterious, like the other Packards I had mentioned, since I couldn’t find anything on him either! I found two results for Thomas Packards, one who died in Lawrence, Tennessee and another who died in Chattanooga. Neither seemed to be the same as this man. Sadly, all that could be found was a “Thomas Parker” who died in 1916, no Thomas Packard…

Then there was Lethe Packard who died in 1928, whose record also could be found in the Tennessee Death Records 1914-1933 collection (specifically Record #: 22500), dying in Shelby County. There were no results whatsoever on newspapers.com when looking up his name. Results on Family Search seemed to lead to nothing until I stumbled upon a Tennessee Death certificate! [1] It named his parents and everything. What a great find! It could lead to further answers to who this man was.

It showed his father was E.E. Packard, who was born in Georgia and his mother was Mary Bond, although her birthplace was not known.  Although his date of birth was wrong (it shouldn’t have been 1928 but should have been 1872), it did note he was born in Arkansas and that he was single, even though he was age 56.

6 thoughts on “The Packards in Tennessee and a research bust”