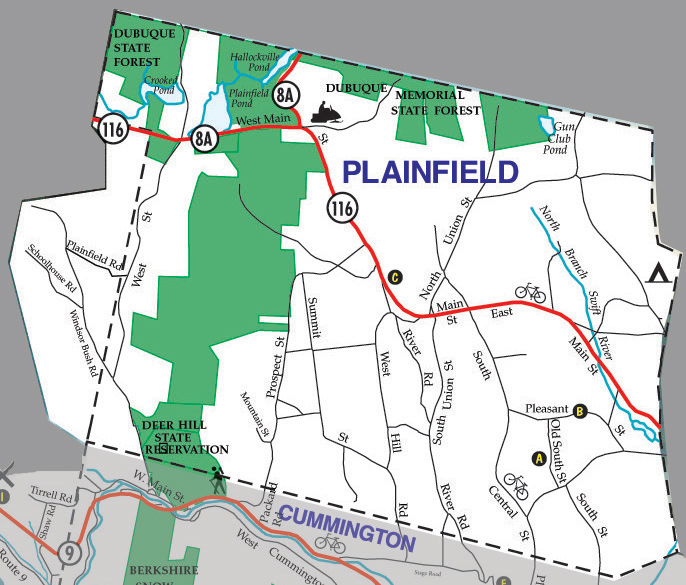 I’ve written in the past about the small town of Plainfield, Massachusetts, and sits to the north of more populous town of Cummington. I’ve noted in “Chapter IX: Barnabas, Mary, and Plainfield,” how Barnabas Packard II moved to Plainfield, between 1764 and 1789, clearing the “wilderness for a farm in what is now Plainfield’s Maple Street” and later marrying a local woman named Mary Nash. In the same article, I wrote that “the town of Plainfield was not at all new…[it] had begun to be settled in 1770 but was not incorporated until 1807…[and it] has moderate to rugged terrain, with some areas having relatively gentle hills…no major waterways go through Plainfield,” with a number of Packards buried in Plainfield’s West Hill Cemetery. I’ve also written about William Henry Packard, in “William Henry Packard and the Civil War,” the farmer who served in the Union Army, from Plainfield, who I also wrote about in “Chapter XI: The Civil War, William, Rachel, and Massachusetts,” and about Cyrus Winfield Packard, in “Chapter XII: Cyrus, Dora, and the last of the Packards,” whom was born in Plainfield and married Dora Mills, owning 112 acres in West Hill, likely near the cemetery. Beyond this, I’ve also written about Barnabas Packard III living in Plainfield, as noted in “Chapter X: The last Barnabas, Ruth Snow, and Cameron, Missouri,” mentioned it in my “Family tree chart for reference” and the “”Introduction” to my Packard family history.” Additionally, there has been mentions of Plainfield in my article about David Packard (“The family tree of David Packard, co-founder of Hewlett-Packard (HP)”), a post examining the sources of the Plymouth Colony Pages, a post focusing on Packards in South Carolina, the “other Barnabas,” and the mystery Packard family history book. That’s not all! I also mentioned Plainfield in my post about the story of Cyrus and Clementina since they both lived there, a small mention in the post about Cyrus running away from home, and a post introducing my Packard family history.

This brings us to the topic of this article: Plainfield today. Using the 2016 American Community Survey, available through the U.S. Census Bureau’s American Fact Finder for “Plainfield town, Hampshire County, Massachusetts,” we discover, not surprisingly, that Plainfield is over 91% White, but is not old and aging, as one might think, as there seems to be a good amount of youth in the town. There is some people of color, but not many. Such demographics should not be a surprise since the 2010 census notes that 40% of the population have children under the age of 18 in their households. This census also says there are 269 households in Plainfield, 69 of whom are a 1-person-household, 111 of whom are a two-person household, comprising the majority of households in Plainfield itself! The median age of those in Plainfield is about 53, meaning that many are middle-aged or getting close to it.

This brings us to the occupations within Plainfield. Of the individuals who are employed, most are in “management, business, science, and arts occupations” which includes the following:

Others in Plainfield are mainly employed in the service; sales & office; and natural resources, construction, and maintenance sectors.

Taking this into account, the listing of “Industry by Sex for the Civilian Employed Population 16 years and over,” notes that 113 are employed in educational services, and health care and social assistance, and 46 in retail trade, with all other industries having smaller numbers of people within them. Interestingly, the median household income of those in Plainfield is $54,886 but still 10.1% are in poverty, while educational attainment is relatively high as noted  by the American FactFinder.

Otherwise, the news mainly focuses on civic issues, including low voter turnout, with only “56 out of a total of 465 Plainfield registered voters” voting, possibly because “the Annual Town Meeting was held at the Public Safety Complex rather than the usual Town Hall where voting takes place” as the Plainfield Town government says “these factors probably contributed to a low voter turnout.” Or perhaps it has to do with overall apathy?

It is also worth noting there is a historical commission in Plainfield and a Shaw Memorial Library (with limited hours) which I wanted to visit when I was in Plainfield last, but was unable to do so.

That’s all for now. For next time!

One thought on “Plainfield, Massachusetts today”