There are many subjects I could write about here. Either looking at vital records for Abington, Massachusetts to see where Packards pop up, results on Family Search for the surname of Packard, or mentions in a “Genealogical Dictionary” seemingly. [1] What I am inquiring here about is a man named Captain Samuel Packard painted by an American painter named James Earl, in the last years of his life, in circa 1794. The oil on canvas painting, which measures 35 by 29 1/4 inches, is of a prominent man in New England, begging the question: who is this man? 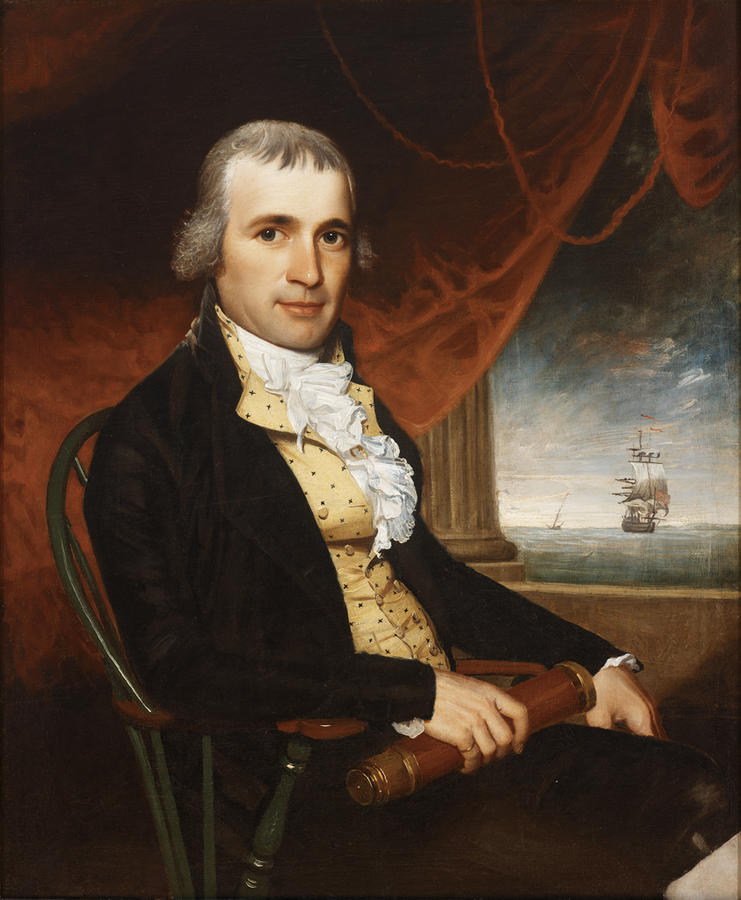 A photo of the above painting, held by the RISD Museum, is reposted here from the RISD website based on the Creative Commons license used for all RISD Museum works, which lets “others remix, tweak, and build upon your work non-commercially, as long as they credit you and license their new creations under the identical terms.” This post is a non-commercial work as it is intended purely for educational purposes about the Packard family.

In their description of the above painting, [2] the RISD Museum writes that

Seated casually in a Windsor chair, Samuel Packard signals his social and professional role in the new republic. The plush drapery, the decorative column, Packard’s fashionable bright-hued waistcoat all suggest that is a man of wealth. The ship in the distance and the spyglass refer to his interests in maritime trade. A merchant and talented mariner, Packard owned 39 vessels that sailed from Providence. Around the time of this portrait, Packard had completed missions abroad for George Washington, so the ships may also allude to Packard’s diplomatic travels.

He was married to a woman named Abigail Congdon and had a daughter with her which had the same name (Abigail). They were married on December 13, 1789 in Saint Pauls Church, Narragansett, Washington, Rhode Island as the record shows:

In January 1942, the Rhode Island Historical Society displayed the painting of Samuel Packard on the cover of their historical magazine. One article titled “A Rhode Islander Goes West to Indiana” by George A. White, Jr. explained more about Capt. Samuel Packard’s role in the early United States. He wrote on pages 21-22 that

Captain Samuel Packard was the son of Nathaniel Packard and was born in Providence, October 17, 1760. His father owned land bordering North Main, Howard, and Try Streets. Captain Samuel Packard’s life followed a similar pattern…he was a mariner, ship master, ship–owner, and merchant. He owned 39 ships, sailing from Providence to all ports of the world…an ardent admirer of George Washington…Captain Packard acted for him in secret work [during the revolutionary war]…[after 1797] Captain Packard and his family lived in a mansion [in Providence] built of wood and brick, measuring 25 feet on the street and 60 feet deep. It was three stories high…On December 13, 1789, Captain Packard had married Abigail Congdon…in 1798, Abigail (Congdon) Packard inherited a portion of the Congdon homestead farm on Boston Neck…in the early 1800’s Captain Packard purchased the remainder of the farm…Captain Packard owned land in Cranston, R.I., and in Illinois. Captain Packard furnished his Providence and North Kingston homes with fine furniture, china, and silver

Apart from the confusion of Samuel Packard who arrived in 1638 with Captain Samuel Packard (as noted here and here), some got it right. It is evident that Captain Packard was a “revolutionary patriot,” which was also recognized by William Shaw Bowen who gave some of the Captain’s belongings to the Redwood Library in 1878. He may have commanded a company during the war with the British from 1812-1815 as well, although this be a confusion with another Packard.

There is no doubt that Captain Packard was renowned as a master of ships, while transporting important financial papers. While it would seem, reportedly, was pointed to the spot where Roger Williams, Rhode Island’s founder, was buried, with one book saying that, this is actually referencing Nathaniel Packard who married a woman named Nabby. He was, however, one of the original members of the Providence Marine Corps of Artillery and, later on, the Providence Marine Society.

Captain Packard clearly had a role in the revolutionary war in moving supplies past the British blockade as Vol 4 of Naval Documents in the American Revolution reports:

These events happened in April 1776

I still question whether this is the right Packard, however.

Captain Packard went beyond the owning of slaves by Zachariah Packard as noted in my family history. He sailed a ship to the coast of Africa looking for Black Africans to enslave in 1797 contrary to Rhode Island law. As the University Publications of America noted in a guide to certain Rhode Island Historical Society records,

Moreover, Moses Brown’s letters reveal not only the Abolition Society’s formal legal stratagems but also its traditional policy of intense but informal negotiating with slave traders who often yielded to the group’s demands without a court fight. Cyprian Sterry, for example, the principal slave trader in Providence during the 1790s with fifteen voyages to the African coast in 1794 alone, fully succumbed to the society’s persistent pressure. He escaped prosecution (along with his captain, Samuel Packard) for an African voyage involving the ship Ann by signing a written pledge to leave the slave trade forever.

Captain Packard was seemingly related to a Capt. Nathaniel Packard who was also in Rhode Island. Other books sadly only exist as snippets and hence do not give much information about his life. However, there is no doubt that he lived in Providence, Rhode Island near houses that nowadays are called historic (see pages 16 and 17 of this PDF).

You would be able to look at the deed books either by going to the Rhode Island State Archives, as noted here, or being at a Family Search Library.

He was alive and well in Providence in September 1794 when a ship, Hope, came into the harbor:

Thanks to Family Search, I have also discovered:

As it was noted, in one of the books I found, that a Captain Packard died at age 80 in 1809. There is a Samuel Packard who died in 1823 at sea with a tombstone in Rhode Island along with a Samuel Packard Jr who died in Providence in 1799. His tombstone makes it clear that he was born in Oct 1760 and died on July 17, 1760. This is clear from the following transcription:

In the memory of

[1] Also it is worth noting that no Packard popped up here, meaning that there is nothing in Family Search’s Massachusetts, Town Clerk…Town Records, 1626-2001 specifically for  Norfolk,  Weymouth or  Land records 1642-1644. Packards could be on this page, but is also questionable. Additionally, I could look at online records of Hingham to see if the Packards appear, possible Packards on pages such as this one or this. But I have already done that in the past and future searches at this time are a waste.

[2] The Rhode Island Medical Journal writes that “several other portraits by James Earl in the RISD show bear a strong stylistic similarity [to the one of Dr. Amos Thoop], particularly that of Capt. Samuel Packard of Providence, a successful ship captain, merchant, and ship owner of Throop’s era.” The painting is in the Smithsonian’s Art Inventories Catalog but resides at RISD. As one person writes about the collections in Rhode Island, “Postwar Windsor production at Providence for domestic use is indicated in the accounts of the Proud brothers and in a circa-1795 portrait of Capt. Samuel Packard seated in a sack-back Windsor.”

6 thoughts on “A “social and professional role”: the story of Captain Samuel Packard”