Pamphlet for meeting opposing annexation of Texas in Boston.

Theophilus D Packard, as his Find A Grave entry notes (which I wrote), was born in Bridgewater, Massachusetts on March 4, 1769 to Abel Packard and Esther Porter, and had three siblings. By February 25, 1800 he would marry a woman named Mary Terrill in Abington, Massachusetts and they would have five children: Theophilus (1802), Isaac (b. 1804), Louisa (b. 1808), Laura (b. 1815), and Jane (b. 1817). He would live in Shelburne, Massachusetts until his death, serving as a Christian minister, going to Princeton, Amherst, was a member of the Franklin County Anti-Slavery Society (FCAS), formed on December 1836, and helped Mary Lyon establish the Mount Holyoke Female Seminary. Beyond that bio, and his death in September 1855 at age 86, he would be involved in four anti-slavery petitions to the US Congress.

As the nation continued to debate the topic of enslaved Blacks, Theophilus came out on the side of justice. On September 18, 1837, he joined “other congregational ministers of the Franklin Association” in Franklin County, Massachusetts, to protest against the “annexation of Texas to the Union of these States.” Nine days later he (or perhaps his son of the same name who seemed to be against slavery as well) signed onto another petition. Again he petitioned on behalf of the Franklin Association of Ministers, supporting “the abolition of slavery, or of slavery and the slave trade, in the District of Columbia, or in the District of Columbia and the Territories of the United States.”  Two days later, John Quincy Adams, then a representative of Massachusetts who strongly disapproved of “the expansion of slavery..[and] the annexation of Texas and the war with Mexico,” specifically

presented sundry petitions and memorials of inhabitants of the Commonwealth of Massachusetts, praying that the resolution of the House of Representatives of the 18th of January last, requiring all petitions, memorials, and papers, relating in any way to slavery, to be laid upon the table, may be rescinded

One of those petitions was from “…Theophilus Packard and 13 other citizens.”

Theophilus wasn’t done. With fifty other citizens of MA, on January 12, 1846, he petitioned “against the admission of Texas as a slave State into the Union.”

In order to understand Theophilus’s stand, lets give some historical background.

In 1836, Texas had declared independence from Mexico because they felt the Mexican government had “ceased to protect the lives, liberty and property of the people” of their region, cited “atrocities” by the Mexican state on those in the region including siding with indigenous peoples, declaring that “the necessity of self-preservation, therefore, now decrees our eternal political separation.” But there was more than this.  When they talked about “property,” they meant enslaved Blacks. Article 5 of the 1836 Treaty of Velasco between Mexico and Texas made this clear:

That all private property including cattle, horses, negro slaves or indentured persons of whatever denomination, that may have been captured by any portion of the mexican army or may have taken refuge in the said army since the commencement of the late invasion, shall be restored to the Commander of the Texian army, or to such other persons as may be appointed by the Government of Texas to receive them.

From 1836 until 1845, Texas continued as an independent slaveholding republic. By 1845, as the Texas State Library and Archives Commission argued, the joint resolution passed by Congress, “that admitted Texas to the Union provided that Texas could be divided into as many as five states.” [1] James Polk, then the President, supported the measure, saying it was “the peaceful acquisition of a territory once her own.” Furthermore, as the US State Department, all of all places, says in their write-up on the topic, there were economic motives at play:

…Texas was a producer of cotton. It was also dependent upon slave labor to produce its cotton. The question of whether or not the United States should annex Texas came at a time of increased tensions between the Northern and Southern states…over the legality and morality of slavery… there was another issue raised by the Texas-cotton nexus: that of the market for raw cotton. One of the largest export markets for North American raw cotton…was to Great Britain. As long as Texas remained an independent state, it could give Southern U.S. cotton plantation owners competition in terms of setting prices

The Texas government accepted the terms proposed by the US Congress, the latter which allowed Texas to be a “slave state,” giving it two representatives in the US House of Representatives.  In later years, Southerners wanted to “exercise the provision to create another slave state from Texas to balance the admission of California as a free state” but this was rendered moot with the end of the Civil War.Beyond that, Texas would later be given $10 million to pay off its debt to Mexico, along with the passing of the Fugitive Slave Act, all as part of the Compromise of 1850. While the nation stayed united, it didn’t stay that way for long, as the Civil War from 1861 to 1865 tore the nation apart, with over 600,000 people dying overall in one of the most bloody conflicts in US history. Texas, in its declaration of succession defended its slaveholding, declaring that abolitionism was one of the causes for joining the Confederacy, which fundamentally was (and should always be seen as) a pro-slavery racist force:

…the non-slave-holding States…demand the abolition of negro slavery throughout the confederacy, the recognition of political equality between the white and negro races…For years past this abolition organization has been actively sowing the seeds of discord through the Union, and has rendered the federal congress the arena for spreading firebrands and hatred between the slave-holding and non-slave-holding States…We hold as undeniable truths that the governments of the various States, and of the confederacy itself, were established exclusively by the white race, for themselves and their posterity; that the African race had no agency in their establishment; that they were rightfully held and regarded as an inferior…the servitude of the African race…is mutually beneficial to both bond and free.

Theophilus, although there is no record he went to the southern part of the US, was among the “firebrands” that Texas detested for reasons as mentioned above. For this, he should be celebrated by any rational individual. He was, by any definition, an anti-slavery crusader, a fighter for justice, to say the least. It is hard to say what political party he was sympathetic toward, but undoubtedly sided with those at the time who opposed slavery. 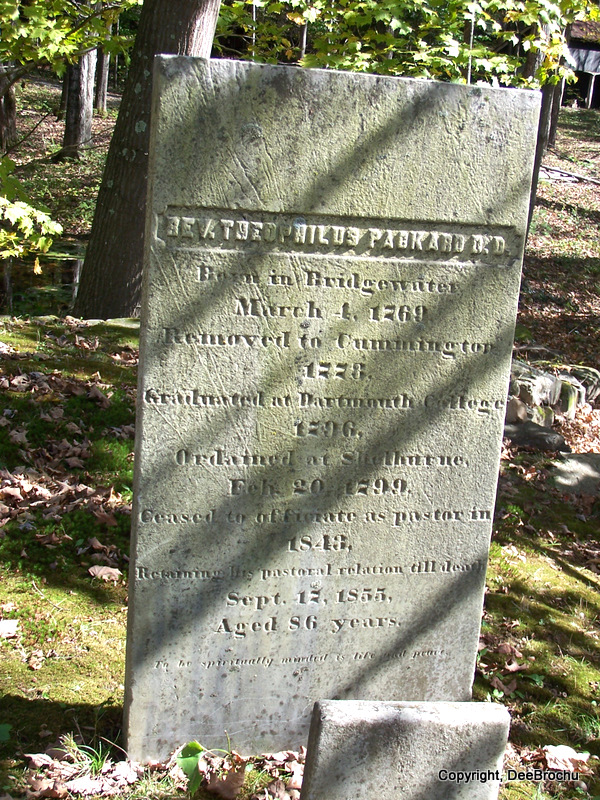 Courtesy of Find A Grave. While something seems to make me think this is a new stone, the lichen on the stone makes me think it was actually created in 1855.